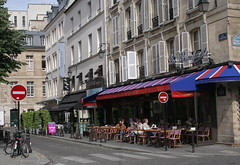 Today, my body is protesting the non-stop walking and sightseeing it's been doing for the last week and a half, and I'm at the half-way point in my trip (boo hoo), so I thought I'd have a quietish day. I'll take myself out to lunch later (mais naturellement), but this morning am doing some mundane things like taking out my garbage - in which it is discovered that the Parisians do, in fact, recycle, though there was in my courtyard no box with the yellow lid into which, according to the lovely sign by the garbage cans, I was supposed to put plastic bottles and bags. I managed to put all my empty wine bottles into the right place, anyway (kp would be proud of me).

marri was asking me earlier about cafes, and whether they were the same as cafes in Victoria. In a word, no. The only real similarity is that they both serve coffee.

How are they different? Well, to start with, when you approach a cafe, the first thing you notice is the rows of chairs and little tables spilling out onto the street, very close together. Everyone sits facing outwards, as at a play or performance, which, in a way, it is. The action is on the street, and the people going by. As you pull up, you will see two, three or maybe more, waiters hovering around, probably dressed in a white shirt, black pants, possibly a black vest, possibly a bow tie. The look is very formal. He (I have yet to see a woman server at any of these establishments - and he's proud of his job, no need for fancy euphemistic titles like barristo for him) will be holding a little silver tray, and will ALWAYS say "Bonjour, madame" as you approach or sit down. He will glissade up to you almost as soon as you sit down, with a menu.

So, what can you buy at a cafe that's different from Victoria? Well, wine to start with. You can - and people do - buy wine all day long and without food. The default coffee is espresso; if you ask for a coffee, that's what you'll get, in a tiny china cup on a saucer, with some sugar lumps. The better places will give you a glass of water as well, and sometimes a nice crisp little cookie. I usually buy cafe creme, which is the closest thing to a latte. These vary in size and quality. Sometimes you can taste the evaporated milk. At Les Deux Magots the other day, I had the best one, which was brought in two little jugs - warm milk in one, coffee in the other, enough for three cups if you are judicious with the coffee. There is no coffee "to go" - I can no more imagine anyone (except some poor hapless American tourist) going in with a portable coffee cup such as we use, than I can imagine a Canadian walking down the street eating a plain baguette as if it were a hot dog. Other popular items include orange presse (fresh squeezed orange juice, very good) and of course all the pastries. Most, not all, of these places also serve food ranging from salads and sandwiches to full course meals. I haven't quite figured out yet at what point a cafe becomes a bistro...

You can stay as long as you like, and it is customary to linger over a newspaper, a book, a journal or just conversation. Before you leave, you pay the waiter on another little silver tray. No need to leave a tip, though I usually do because the service is pretty amazing.

I'm going to peruse the Marais et environs this afternoon, and maybe do some light shopping - will post more later if anything greatly interesting happens.