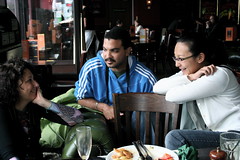 Today I girded my loins and went to meet some fellow Flickr-ites at the "Frog and British Library" cafe out by the Bibliotheque Francois Mitterand. When I say "girded my loins" understand what the people who know me well know: I am almost painfully shy, and it is almost physically difficult for me to face a room full of people I don't know. But I knew that there was a Flickr meet-up today and at this place, so I thought "damn it, I'm going" and I went.

It was nice. Not wonderful, but nice, and I'm proud of myself for going. They were all charming and welcoming, but once my French dried up and their English dried up, is was a little awkward. But I made the effort, and I have some photos to show for it, and so far three five six new "contacts" on Flickr, which is very nice indeed.

Afterwards, I went to the Orangerie Museum and looked at Monet's Waterlilies, which were wonderful.

Ps: My French may be crap, but I'm not a crap photographer, anyway :)