A Stage Set for Buffy 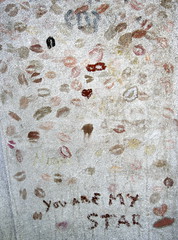 So on Thursday afternoon, on my return from Mont St Michel, the sun was for once shining in Paris, so I took myself off to La Cimetiere du Pere Lachaise, burial place of the famous, the infamous and the just plain ordinary.

I procured a map from a jolly stall holder by the gates. It was a good thing I did, because I think I would have become hopelessly lost and not seen the graves that I wanted to. It is a beautiful spot, criss-crossed with tree lined avenues, quiet and relatively peaceful (apart from the tourists tromping through). It did strike me several times as being a perfect setting for the opening scene of any Buffy episode - I half expected Spike to pop out from behind one of the monuments (too bad he didn't lol). My map came in handy, too, for others, as I was frequently stopped and asked for directions in several different languages: "Je cherche Edith Piaf" was a middle-aged French woman. Nous trouvons Edith Piaf - the woman and her husband went and got themselves a map and we ended up at Piaf's grave at the same time.

I, in the meantime, wended my way past Proust to the monument to Oscar Wilde (thinking of you,

superfoo! As you see from the picture, it was covered with graffiti!! Thence to Gertrude Stein, but though I looked I couldn't find Alice B, who was supposed to be next to her. Then Edith Piaf, Sarah Bernhart, Chopin and finally Eloise and Abelard, whose monument was covered in scaffolding and being restored. Oh, and Simone Signoret and Yves Montand were in there somewhere. And no, I didn't bother with Jim Morrison - there were plenty of young Americans going in his direction so I didn't think he needed my respects as well.