I remember that last year in London jet-lag hit me with a wallop on the second day I was there rather than the first; the same is true now. Happy as I am to be here (and I am), it was an effort to get up and get out the door this morning.

Nevertheless, I accomplished my goals for the day. I procured a Museum Pass, found the Cartes d' Art shop and bought some unusual postcards, tracked down the shop my father visited in ... possibly ... the late 40's or early 50's. He was in the RAF, posted in Germany, and his job at the time was to carry dispatches from his base to Paris. Lucky him! I have something that he bought when he was here on one of those trips, and had some very, very faint hope of finding the shop. But non. It is now a trendy clothing shop in the Rive Gauche. Never mind. It was something to have traced his steps.

This afternoon, I explored more of "my" neighbourhood, and found first of all a Supermarche and bought some necessities like butter and salad dressing and more wine and more chicken (it is a less than closely guarded secret that I could happily live on Rotisserie chicken and salad). I found another market area a little farther afield (turn left at the Irish Pub!!) and made my way to the Parc de Monceau, a welcome oasis of greenery and flowers and statuary, within about a ten to fifteen minute walk from my apartment. 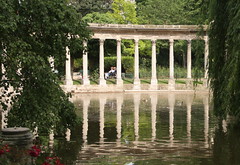 Life is made somewhat more difficult by not speaking the language. I completely abandoned the idea of buying an ice cream cone in the Parc because I simply didn't know what to ask for. Then again, sometimes things are just more difficult than they need to be. I knew that I could get the Museum Pass at the tourist information office at the Louvre. Consultation with the little map on the internet showed this establishment to be near the Carousel area, by that Arc de Triomphe de Caroussel that I saw yesterday. It's quite clearly marked on the little map. So I go there, and ... no... there's no Tourist office to be found. So, there was a kiosk of some kind with a couple of official looking guys in it, and I went up and said, I'm looking for the Tourist Office. Where is it? "Downstairs" he said. Um. Downstairs? Oh, yes, over there, there's a completely unmarked hole in the ground that leads you to this very official complex underground where, yes indeed, there is the office of tourism and one can get a Museum Pass. Phew. Some signage would be helpful, if anyone's interested...

The Museum Pass is good for 4 days, so I have to plan strategically. The next few are supposed to be cloudy and showery, then Monday is rumoured to be fine. Perhaps I will go to Versailles (covered by the pass) on Monday, and spend the next few days in the museums that I want to go to. I also want to go back to Saint Chapelle and see if I can get concert tickets (as well as just seeing the place).

Best Paris moment today? Definitely the jazz band playing on the Metro. (no, not in the station - actually IN the Metro) It was very very cool.

Any spelling mistakes or wobbly grammar, by the way, have to be put down to the fact that I'm drinking another bottle of wonderful wine that cost me about the equivalent of a 2L bottle of Coke at home. I'm surprised that alcoholism is not rampant here.