I was too tired last night when I came home to do much more than load my photos into Flickr, eat, have a hot bath and go to bed. So you get a two-for-one today, or at least this post now and another about today's doings later. 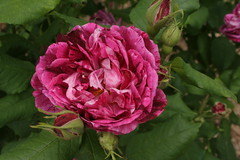 Yesterday morning, it was sunny, so I headed out into the suburbs to visit the Chateau of Malmaison. How beautiful it was! Tucked away down a long, cobbled avenue, it is a charming small villa surrounded by hectares of woods, grass and flowers, including, of course, some of Josephine's pet roses, or at least some "reasonable facsimiles" of what she grew. I have a rose in my garden called "Souvenir de la Malmaison," which I believe the Czar of Russia presented to Josephine (some personage or other, if it wasn't the Czar), so I rather wanted to visit the place itself. The Chateau has been done up as a museum, with gorgeous furniture, Sevres porcelain and even some dresses from the period. The David painting of Napoleon on horseback is there (the one at Versailles is a copy, the museum guy told me). In fact the walls are covered with pictures of his nibs: for a divorced woman, Josephine seemed to like having his face around. And indeed, apparently he used to go out for weekends (doubtless "dirty weekends"), until he himself was imprisoned and Josephine died from a cold. Anyway, it was totally worth the trip, quiet and beautiful - I liked it much better than Versailles. And it was nice not to be surrounded by crowds of people. There was a school group of children; otherwise, two Japanese tourists, an elderly French couple and two American women, one quite young and obviously bored stiff. The children were enjoying themselves thoroughly - no doubt it was nice for them to be out of school for a morning.

There were many groups of children and adults at my next stop: the Pompidou Centre. First, I went for lunch on the Rue Reynard, a few blocks away. I had a lovely meal of beautifully cooked steak aux poivres, pommes frites, and some slightly overcooked (to my taste) haricots verts, and, of course, a nice glass of Bordeaux and coffee. (Boy, am I ever living the high life).

Thence to the Pompidou, to peruse Modern Art. Compared to the Louvre, it, too, was fairly quiet, though there were, as I mentioned, numbers of school groups of children and adults, including some children who looked to be about 4 years old and obviously having a great time. They must start the culture young in France - bon.
Apparently, they change the collections all the time, so you never know what you're going to see, but that's nice in a way too because you don't feel you've missed something vital since it may not have been there anyway! There was a lot to fascinate, including the Red Rhino I mentioned, a room of Diane Arbus photos, that interested me, of course, and... oh too many things. Picasso, Matisse, Dali, Chagal, and a lot of very new things. A marvellous winged creature with airoplane wheels, covered with knives, scissors and other sharp objects confiscated from airports since 9/11, meant to represent the strange quality of the world since that date. It's a wonderful space, too - every room and hallway seemed to express the quality of the museum as a whole.

So, after that, as I wrote at the beginning of this post, I was pretty much knackered and just went home to bed. Museums are wonderful but tiring. My museum pass has finished now, and I got good value from it, but I will do other things for the next few days at least.

I slept late this morning, so instead of having breakfast in my apartment, I headed down to the St Germain des Pres district and had coffee and croissants and orange presse at Les Deux Magots Cafe. I shared my breakfast with some sparrows and pigeons. 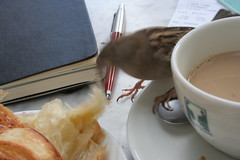 Then, because I was feeling tired after several days heavy museum viewing and sightseeing, and because the sun was shining, if fitfully, I decided to spend the day cruising the Seine. I bought a day pass for the Batobus - the little water-ferry that does a circuit tour up and down the Seine from the Eiffel Tower to the Jardins des Plantes. I caught it at the Louvre, and went all the way round to the Jardin des Plantes. I then spent several hours wandering the gardens and found a frog pool, where I swear the frogs were croaking lines from Aristophanes ("Brek kek kek kek, koax koax") 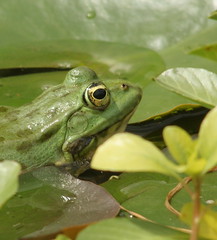 I walked through the Jardin, had a look at the Grand Mosque de Paris, and bought a sandwich from a small shop behind the Mosque. This, I ate sitting in the Jardin, then I re-boarded the Batobus and cruised down to the Champs Elysees and from there up Rue Miromesnil to the Rue Boetie and "home." And there, I did some laundry, and read and caught up with my LJ, and here we are!
Collapse