I'm in the last day of my trip, now, so be prepared for some musings on general impressions about things as I bring my travel entries to a close.

Believe it or not, I've hardly bought any clothes here - only one blouse for the hot weather that I may leave behind and a pretty little camisole t-shirty thing that I couldn't resist. Part of the reason is that the "fashions" - read "what is trendy" - right now are unflattering to the extreme to me or to anyone with a halfways normal body. There are a lot of shapeless and baggy thin knits, worn in several layers (think of the trend for short t-shirts over longer ones at home and then go baggier). Lots of "boho" or peasant things. Skin tight, and I mean really skin tight, like leggings, jeans. Leggings - worn under all those baggy layers. And watch out, ladies, pantaloons are back. And skirts or dresses gathered at the knee (yuck). The skirts all fall right at or just below the knee - just about THE most unflattering length for almost anyone.

The accessible ready-to-wear shops are plentiful, inexpensive but terribly much of a muchness. I have seen a few things I would have happily bought but that were too expensive - a peasanty jacket from Antoine et Lilli that was only thin cotton and not even all that well finished cost 140 Euros (that's close to $200 cdn). I wandered into one shop yesterday where an absolutely beautiful young woman was selling her own designs, hand made, silk, and gorgeous, but you can imagine the prices.

One reason that I can be spotted as non-French before I even open my mouth is that no Parisian woman would be caught dead in my sporty, clunky, comfortable and practical sandals. I don't know how they avoid mass ankle and knee injuries walking over all the cobblestones, but every French woman I see wears little thin delicate shoes, often with very high heels.

Which brings me to something that surprised me quite a bit. Despite its reputation as fashion capital of the world, and rumours of "effortlessly chic" women here, I've seen more fashion victims per capita than anywhere else I've ever been. By this, I mean women wearing extremely unflattering clothes simply because they ARE the fashion (see all the comments above). Almost every woman I've seen, from the age of about 80 on down, as far as I can tell, is determinedly wearing all those baggy layers, boho frills, tight jeans, and teetery heels.

There have been some notable exceptions. A few women, if tall, skinny and young enough, actually look good in the latest fashion. My landlady was one - and I have the impression that she is a designer or maker of clothes herself. There was a fabulous looking woman of about my age walking through the Gallery Lafayette; she looked like a retired model - tall and beautiful - and was wearing well cut jeans, a blue and white striped shirt and a navy blue blazer. There was a woman a little older than I wearing a white shirt, long narrow black coat, black flared pants and white sneakers. She looked great. There was a beautiful young woman on the metro, with her toddler in a stroller, who was wearing ordinary nicely cut pants and a mid-length green coat, the collar turned up, and one of those ubiquitous european scarves. I saw a younger woman, a girl really, on the metro early one morning who looked like a model on a "go-see" - she wasn't wearing the "trendy" clothes either but she did look effortlessly chic. She had no make-up and her hair was tied back in a pony tail; her face was one of those that is slightly odd looking in real life but would photograph well. And she was about 6 feet tall.

There was a woman who was half of a middle-aged couple who looked to me like the quintessential Parisian bohemians. She was wearing the real thing, not pseudo boho fashion, and had the kind of world-worn face and striking almost gypsy hair and sexy body to be able to carry it off. His hair was almost as long as hers, grey and straggly, and he was wearing patched jeans and a leather jacket. They sat on the Metro, loosely draped around eachother, obviously in love. Marvellous.

And then there was the person I saw yesterday, literally covered with tattoos from head to toe (face and all). I couldn't tell whether this person was male or female. Quite extraordinary.

One thing, though: there are virtually no fat or even plump women, or men for that matter. That rumour is true. 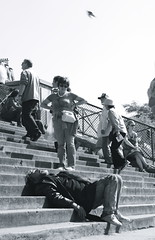 Today, I noticed a big influx of rather well-heeled touristy types at my favourite cafe, then I remembered that the French Open starts today or tomorrow. Probably a good time to be leaving Paris.

I can't finish these entries without some remarks about my fellow visitors to Paris. And I apologize to some on my flist because I perforce will be making comments about people from that big country south of Canada, in which I know some of you reside, and those comments may tend to promote certain stereotypes. It can't be helped, really; unfortunately, many of those tourists from you-know-where behave precisely the way one might expect them to, based on those stereotypes.

First, though, I was struck by how truly international the tourists are here, and indeed everywhere else I went on this trip. I have encountered at least as many obvious tourists from Italy and elsewhere in France as the "usual" (or what is usual for BC, Canada) Japanese and Americans. I've run into quite a lot of visitors from Mainland China, and as my Chinese is actually better than my French, was in the odd position this morning of giving a trio of them directions in Chinese. And of course there are the Germans, who have their own brand of stereotypes to live up to, or down, or whatever. And a few Aussies, and even one or two Canadians.

Here are a few vignettes:

The young, Paris Hilton-like, bored, drawl in Sainte Chapelle (for me, the most stunning place I visited): "What was the name of this place again?"

The American women who thought "Tours de Notre Dame" meant Tours of Notre Dame and were horrified to find themselves climbing 155 or however many stairs to the top.

The unfortunate, obviously Muslim and vegetarian man in the take-out bagette sandwich shop asking in somewhat desperate tones if everything had "meat," and the clerk saying but of course!

The nicely dressed family (Americans again) this morning at the cafe who ostentatiously passed around one of those bottles of disinfecting gel before having breakfast.

The group of women in the restaurant where I had lunch today, who I could hear were annoyed because I got better service than they. I felt like saying, "well, if you don't even try to speak French, and you order Coke with the dish off the menu that they have to prepare specially instead of doing what I did and ordering the plat du jour and asking your waiter to recommend a good wine..."

Then again, there was the charming couple from Seattle whom I met at Giverny and talked to for quite a long time, and the two women from "Phillie" this morning who were absolutely thrilled to be here and delighted with everything.

There's that Italian women in my photograph above, who stopped and stared at the drunk passed out on the steps of the Sacre Coeur.

And of course, there's me, bumbling around on my own, eavesdropping on conversations, taking photographs and generally being a perfect nuisance probably :) But having a great time.

It's 8:15 pm, and I'm sitting in my apartment, munching potato crisps and drinking wine, coming full circle from almost three weeks ago. I can't believe my stay here is almost over. This will be my last post from Paris; I may/probably will make at least one more (I've got a list of "I love... " and "I don't like..." in my Paris Moleskine notebook) when I get home, but I need to pack away my laptop soon. It's been so great having my laptop with me. Somehow, I just don't write as much when it's by hand - my brain works faster than my pen can, but typing seems to be just the right hand to brain ratio.

I wanted to make today special, and it was in unexpected ways. I had planned to go down to the Isle St Louis again, but didn't make it, partly because it started pouring with rain around noon. However, I did make it down to Les Deux Magots for breakfast and then out to the Marmottan Museum. I'm SO glad I went there! Yes, there are Monets there, but if truth be told I'm getting a bit blase about Monets (heh, listen to me - blase about Monet!). The ones there were interesting because they are from late in his career, and I've just been reading some recent speculation that his style changed later on because of failing eyesight, and you can really see a difference. (I've actually had a private theory that all the Impressionists had bad eyesight, but that's another story...). There were two things at the Marmottan that I was grateful to see: one was all the Berthe Morisots. She has got to be the most underrated artist. I think she's better than Renoir, who in my opinion is sentimental and over rated. There was a little drawing of a girl with her cat that is just perfection itself.

Then, miracle of miracles, there was a whole ROOM full of bits of illuminated manuscripts, and these just had me in raptures, almost in tears, they were so beautiful. The difference, seeing them "live" so to speak. I could have spent hours there, and did spend a long time just raving and muttering and blinking away tears (yes, I'm nuts, but never mind).

So afterwards, I headed out into the rain and just by chance stumbled into a cafe near the metro station, where I had the most wonderful lunch of duck with peaches and pomme dauphinois and a glass of Bordeaux wine and coffee (that's where I eavesdropped on the disgruntled women tourists). Then I stopped off at the Champs Elysees and dropped into the Virgin Mega Store (which is the best "record" store in the world, or at least the best I've ever been to) and then came home.

Now I just have to finish packing. I've spent all my Euros, and much of the next few months' salary :) But it's been a wonderful, wonderful holiday.
Collapse