I just booked the one remaining ticket to the "fangrrrl's" Waiting For Godot. It's for the Sunday Matinee.
Yippee!

Just a flying post, as, not content with my scorage of a ticket to Waiting for Godot, I also managed to procure a same-day ticket to this evening's performance of Tom Stoppard's Arcadia. Not as glamorous as WfG, but seems also to be very popular and has had very good reviews. I read the play as a PhD student and loved it and have always wanted to see a production.

This morning, as well as buying theatre tickets, I hit bookshop Nirvana on Charing Cross Rd, wandered through Trafalgar Sq, into St Martin's in the Field, where I listened to a music rehearsal, and thence to the Tower, along, it seemed, with half the world. 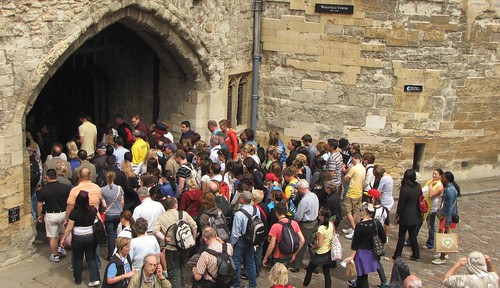 It was a bit too crowded for my taste, but nevertheless an enjoyable outing. Nothing like sitting on the banks of the Thames eating ice-cream and looking at Tower Bridge to feel like "I'm in London! Woo hoo!!"

That was so lovely. The production made it look exactly the way I imagined it when reading it, and the final scene, with the characters dancing and casting shadows on the wall ... boy; I wept.

You realize of course that my PhD studies were Postmodernism/Romanticism, so this play is just like a wet-dream for me. If I hadn't "done" novels, I would have done work on this play, and may still. It's wonderful. I'm so glad I succumbed to temptation.

Jean-Luc and Gandalf will have a lot to live up to!

I had a very good seat, except that the female half of the young couple in front of me had her hair teased into this immense Phyllis Diller- like fright-wig style, which obscured some of my view of the stage. However, they were a lovely young couple, obviously in the first throes of lurv, you know, hands drifting semi-casually, shoulders touching, electric, speaking glances to each other under seemingly casual conversation. What was delightful, though, was that in the interval they launched into a very intelligent discussion of the play, revealing some fairly detailed study of it (I suspect that it may be part of A-level syllabi?). I was so tempted to jump in and add my 2 cents to the conversation, but ... well, you know, there's a limit to academic geekitude.
Collapse