Day 27 - Best pilot episode
Being Human, even though only one of the actors stayed the same in the actual series.
Day 28 - First t.v show obsession
In terms of running home from school unable to miss it, probably Dark Shadows. Boy, did I love Barnabas Collins.
Day 29 - Current t.v show obsession
Cross between Being Human (which I wish was longer and was going to go into Season 3, like, TOMORROW) and... cough... Glee.
Day 30 - Saddest character death
No, not Joyce Summers, although that was pretty devastating. The death on a TV show that upset me the most - and this is pretty obscure - was Samir Rasheed on Coronation St. First of all, it was a shock. Then, the way it happened: he was beaten up by a gang of thugs on the waterfront, while on his way to meet Deirdre (his older lover) and her daughter at the hospital. Daughter needs a kidney transplant, because she has been a drug addict. He is left brain-dead, and hospital asks Deirdre to let them go ahead with the transplant in order to save her daughter. Deirdre bids Samir a tearful goodbye as he and daughter are wheeled into the operating theatre.
I know it sounds corny (this is, after all, a Soap), but I still remember that scene - it was in fact pretty disturbing and very upsetting.

Here are all the questions

I somehow or other have managed to keep up with my 365 Day Photos. Here's July 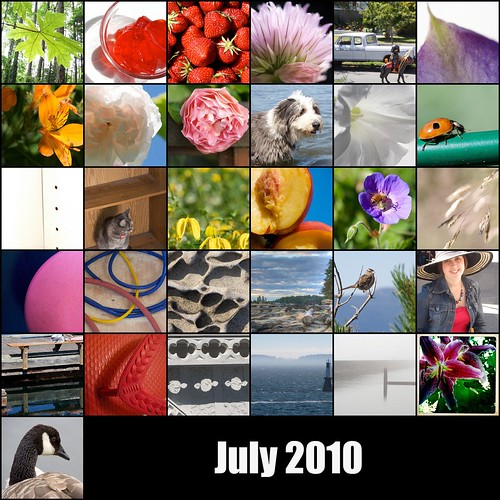 Well, "failing" is probably not the right word. But I've decided that I don't want to continue with the 50-Book Challenge. I _think_ I would probably have done it (although I'm not absolutely sure), but I'm a bit annoyed with myself that I care, and I think this is one obsessive-compulsive list thing that I just don't want to do. Also, I was finding it affecting my reading choices and even pleasure - I was more pissed off than usual if a book I started did not grab me, because it seemed like a waste of time. I've not been rereading, even if I wanted to, because re-reads did not "count." I was choosing not to read something long or difficult because it would set me off my reading schedule.

I just need to stop it. So I'm going to.
Collapse