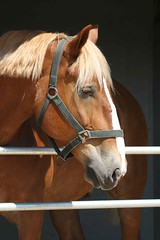 I was invited to join a group on Flickr, "Your Single Best photo of 2005" and, after much thought, I chose this one. It didn't get as much attention in terms of views and "faves" as my two duck photos ("Robinson on Mountain" doesn't count, because I actually took that shot several years ago). But it's uncropped, and I think the light, the composition, the expression on the horse and just everything is perfect (if I do say so myself...)