Simon really is the most endearing little soul. He has the kind of solemn, wide-eyed goofiness that reminds me sharply of some of the cat-characters in Doreen Tovey's series of books about Siamese cats (have any of you read these, by the way? They're lovely). I keep taking photographs of him sleeping, because I am constantly finding him in the most abandoned sleep positions - on his back or lying across my legs with his head lolling downwards. 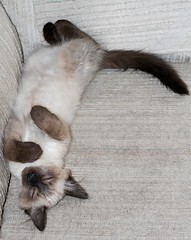 Tabitha seems to be coming round to him, despite herself. Mornings and evenings are now punctuated by cat races around the house (yesterday, I had to move a bewildered Robinson from the place in the hallway where he was being trampled by two sets of thundering paws). Yesterday, I actually spotted the two cats wrestling, and howled with laughter when Simon launched himself from a chair onto Tabitha's back, actually escaping without a pounding. Tabitha is very vocal, and given to screeching as if being murdered when she's only playing. I am getting used to this, too. Tabitha still thumps Simon regularly, but it is with claws sheathed and seems entirely in a not-very-successful effort to put him in his place.

My only concern is that Tabitha may be feeling a bit displaced in my affections. I try to give her lots of love, but she's staying a bit aloof. Also, Simon is extremely affectionate and likes nothing better than to snuggle - it's hard when Tabitha comes chirruping up for a cuddle and Simon is already there. I think I may leave Simon shut in the study with his breakfast in the early morning, because both Tabitha and I are missing our morning ritual of purrs over the laptop and her finishing off my cereal bowl. Simon will be annoyed, but I think Tabitha's needs come first.

However, all in all I'm delighted with this new member of my family, and so thankful that I happened to be in the right place at the right time to find him.

By the way, I think he's twice the size now that he was when I first got him, and he has big paws. And he eats like a horse. I suspect he's going to be large. 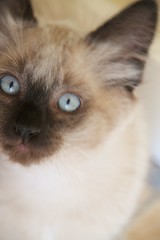 Please welcome the latest addition to my household: Simon the Siamese.

It was one of those nice little serendipitous things; I've been thinking for a while about getting a second cat to be company for Tabitha, especially as I'm facing the loss of Robinson in the not-too-distant future. Having a young thing around might help both of us weather that. And then, yesterday, I happened to be doing routine errands in the Pet food emporium, and there he was! My pet shop does a satellite service for the local SPCA, and I usually go by and say hello to the cats in their cages. Yesterday morning, I noticed a siamese kitten looking out at me, and when I went to talk to him he came right up to the bars of the cage and nudged my hand, then stared at me fixedly, and my heart was lost. My friend kp, the cat expert, had recommended that if I got another cat it should be male and preferably a kitten, and I love siamese cats, so this was a match made in heaven. I wasn't sure they'd let me adopt a kitten, given that I have a dog and another cat, but perhaps it's the time of year when they're over-run. In any case, I got the approval within minutes, and very soon after Simon was ensconced in my bedroom at home.

He has not yet met Tabitha face-to-face, but they have sniffed each other under doorways. I'm letting him have the run of the house when Tabitha is out, and then giving Tabitha lots of love while he's shut away. Robinson is pretty much oblivious. Yesterday, Simon hissed and arched his back at R, but this morning he (Simon) came and hung out on my lap while R was lying at my feet, so I suspect all will be well fairly soon. I'm hoping that later today I can have both cats free in the house. There's something of the quality of a bedroom farce in whipping one out of the way when the other comes to the door!

Simon seems to have a very strong personality and has taken the new surroundings very much in stride. He likes to sit on my shoulders, which is fine for now, though may not be optimum when he gets bigger :)

Deer and elk and ...aurochs? and... beavers? Oh my! My friend KP sent me this link to a story about conservation schemes to replace presently unviable or uneconomical farmland with land populated by "rewilded" animals in England's green and pleasant lands. Many Canadians can attest (national symbol notwithstanding) that they may regret the beavers when the busy little guys start damming everything in sight. No plans are afoot to reintroduce wolves or bears, apparently, as these creatures are considered too frightening... too bad, I say, as one would think howling in the wilds of Wales or Scotland would add loads of atmosphere!
Collapse