In case you were wondering... 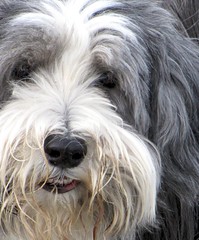 Zoe's doing great. We went to the beach today, and what a difference from the first time. She walked happily off leash, and looks more relaxed and slimmer than when she first arrived. She even smiles occasionally!

She has adapted well; I don't think she and Robinson will ever be best buddies, but they seem to coexist quite contentedly. Tabitha greets both of them and the three of them are happy to hang out wherever I am. Zoe has come quite a long way from the sad little dog I picked up in Port Angeles: she runs, she can sometimes have a little FRAP attach in the garden, she will chase me if I run away from her and always comes bounding up on slightly pogo-stick legs when I call her. She's still not mad keen on having her picture taken, but she seems to have relaxed a bit even about that.

My friend Judith phoned me earlier this evening to tell me that her beardie, Henry, is very ill and not expected to live more than a few days. He's had a tumour on his lungs for some time, and it has finally caught up with him; he's not eating and is failing fast. Henry is Cholmondeley's brother, and they've known each other all their lives, almost. Judith and I met in the park one day, each with a beardie puppy, obviously the same age, and we quickly established that they were from the same litter; in fact, I had met Henry when I met Chums for the first time. When we started talking, it turned out that Judith and I had more in common than just our dogs, and we have become good friends. I also really like her husband, Bill.

I feel so sad - not just at the loss of a great dog, but because when I saw him last I didn't know it was going to be the last time I saw him. I wish I'd kissed him on the nose, or said goodbye properly. But how can you say goodbye "properly"? That's why we didn't meet last Saturday, when I spent the afternoon happily in the garden, because they were taking Henry to the vet - but they called me that evening and said they thought it was only an infection... but it wasn't.

And of course I know what they must be going through. I'm looking at my Chums and knowing that he's nearly fourteen and has been ill already this year and is getting thin and creaky.