One of my resolutions (pardon the pun) for the summer is to take more photos, learn photoshop and make better use of post camera processing. To that end, I'm going to be taking pictures, but also working on some of my France shots or even possibly earlier archive photos and "tarting" them up a bit, making them the best they can be, then posting the results in here as they are done. I'd like to say I'll do one a day, but that may be too ambitious. The first is a shot I took at Mont St Michel, showing you the view over the bay at the rear of the monument. 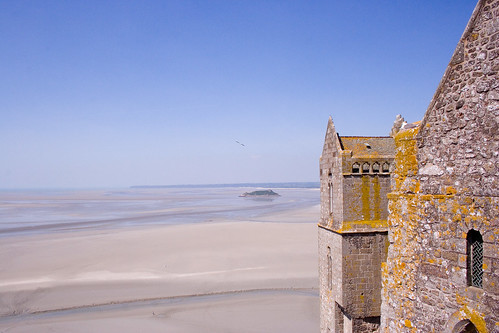 EDIT: sorry if I broke your computers the first time out - I'll just post the smaller size, as the big one doesn't come out to good effect in here anyway. I may have to think about creating a "photoblog"...

This was like a holiday within a holiday, in some ways. Not that I'm tired of Paris, not at all! But it felt like an escape, an extra little fling inside this amazing vacation of mine.

It was a chapter of happy accidents. I had checked the train timetable, and the buses between Rennes and MsM and thought they both ran frequently, thus had thought I would just go when I felt like it and get there when I got there. As it happened, I awoke early, so I decided to catch the 9:15 train from Paris to Rennes. The first happy accident was that, in fact, there are only three "real" buses between MsM and Rennes, one in the morning, and two in the afternoon, and if I had caught a later train I would have missed the bus I caught, which connected with that train. Then I would have been stuck in Rennes until the mid afternoon.