Robinson's death has hit me hard. Also, the general feeling of doglessness. I haven't been without a dog, except for when on holiday, for eighteen years. And only for brief periods in my whole life. And maybe I'm at the best of times a bit lonely, and a dog is a comforting Presence in one's life, even when it is old and infirm and sleeping most of the time.

So I did something a bit foolish. Yesterday, I went on the SPCA website, and there was a 4-month old pointer-terrier cross puppy who looked out at me and I kind of fell in love with. I stomped around yesterday and thought "no, it's too soon..." but this morning I thought, "ok, if it's still there..." and went down to see her. There was a couple ahead of me, but they decided against her. So I filled in my application. And the SPCA turned me down. For all the right reasons. This puppy has already had three homes and is already showing signs of separation anxiety. They want someone for her who ideally has another dog, and maybe in a family where someone will be home a lot. Also they were worried about my two cats, because this dog isn't proven to get along with cats. You know, and I know, that she probably would have been fine, and probably would have been a great fit. But they didn't know that, and I don't blame them. And as I told them, it's probably too soon anyway. But of course when I told them that I'd just lost another dog, I started crying. So I felt embarrassed for myself on top of everything else.

And now I feel even more bereft than I did before, because I'd realized how badly I want this hole in my heart to be filled, and how empty I feel now.

I am saddened to have to report that Robinson is taking Zoe's death very well indeed.

He has been downright perky, and seems more relaxed than he's been for a while.

Zoe was a darling, but she could be quite unpleasant to Robinson. As a friend of mine said, "They don't call them 'bitches' for nothing!"

Robinson is a sweet, unassuming, gentlemanly dog, and couldn't stand up to her. I think he's glad she's gone.

And he's been very attentive to me, as only a sweet dog very closely bonded to his person can be when his person is distressed. As I have been. I'd forgotten just how effing painful grief can be.

Zoe may have been a bitch, but I do miss her.

But Robinson and Tabitha are my creature comforts.

And you! Thank you for all the messages of condolence. They really mean a lot. 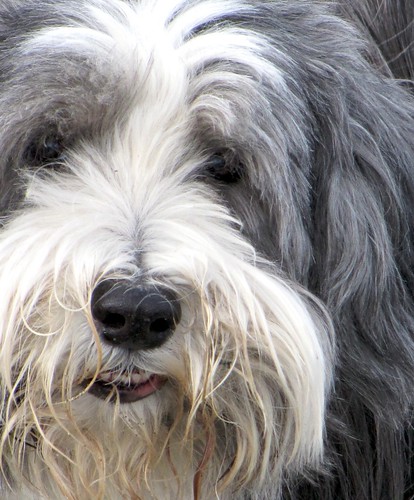 I made the decision this morning to take Zoe to be euthanized. I was going to say "the difficult decision," but it wasn't, really. She's been failing for some time, and went downhill very rapidly in the last couple of days. She was barely eating or drinking, had lost control of bladder and bowels, and was resisting being asked to get up even to pee, let alone for a walk. I could have let her sleep her days out in a diaper, but there didn't seem much point, especially when I could see she was in pain. So the deed is done. She went to sleep, gently, with her head in my lap and me telling her what a good wee girlie she was.

I only knew her for just over a year, but she was a sweet, darling dog, and I shall miss her greatly.

Next Monday is my birthday, and tomorrow I'm going to celebrate with friends, and I'm really looking forward to it.

This past Wednesday, it was two years to the day that my mother died. I think we need to recognize and acknowledge these "death days" as well, even if it's only quietly, in our hearts. I'm saddened to realize that I don't remember what day it was when my father died, except I think it was the beginning of June.

I've been holding things together pretty well, even feeling pretty cheerful a bit of the time, but today a particularly perceptive friend at work asked me if I was okay and I nearly broke down. So I realized that I'm pretty much okay by dint of running faster than I can feel.

And that doesn't change the fact that I'm looking forward to tomorrow, and Monday, when I shall be 52 years old, and those who are going to celebrate with me tomorrow need not worry that I'll be sunk in gloom. I shan't.

I just needed to stop and feel for a moment. Then I'll move on.
Collapse